The Black Pine Property is located approximately 17 miles from the town of Salmon, Idaho, in Lemhi County, proximal to eCobalt ( the Company)'s Idaho Cobalt Project (ICP). Stratiform sulphide mineralization is found in massive sections which typically contain pyrite and chalcopyrite. Aside from the copper rich strata, there are a number of narrower cobalt-gold rich arsenopyrite-bearing beds present in the copper mineralized section. Primary cobalt mineralization within the Regina target has returned some broader cobalt intervals as well as multiple stacked narrower beds. The narrower strata typically carry values sufficiently high to be minable when diluted to a 6 foot mining width. Due to its proximity to the Idaho Cobalt Project, the Black Pine deposit is considered a potential source of future feed material for the ICP mill. Mineralization was first discovered in the area of the present Black Pine property in the late 1800s with several short adits, crosscuts and a shaft completed by 1947. By the 1960's, operators had estimated a historical mineable reserve in one of twelve defined target zones of 340,000 tons grading 3.5% copper (Shockey, P.E. and Calaghan, E.E (1962), referenced in Roscoe Postle Associates Inc. "Report on the Blackpine and Sunshine Properties, Lemhi County, Idaho for Formation Capital Corporation", dated May 05, 1995 - Note: these resources although relevant are historical in nature and are not NI 43-101 compliant and therefore should not be relied upon. The 1962 resource categories do not use current NI 43-101 resource categories and the company has not done sufficient work to convert the resources to current mineral resource categories. Additional work will be required to verify their presence and economic viability. The Company is not treating these resources as current.

Management has since concentrated its development efforts on its nearby Idaho Cobalt Project, but the Blackpine project remains an attractive copper, cobalt and gold property with historic resources that require additional exploration to evaluate its full mineral potential.

The Morning Glory and Queen of the Hills projects are situated in Lemhi County, Idaho, USA, approximately 4 miles northwest of the town of Salmon, Idaho, where mineralization was first discovered in the 1890's. The Company has a 100% interest in certain mineral claims with prospects for gold and silver. The Queen of the Hills property encompasses three known gold-bearing quartz veins. The Queen vein supported an underground mining operation during the late 1800's to early 1900's, and most recently on a small scale during the mid 1980's. About 75,000 ounces of gold were reported to have been produced from this vein, and workings were developed on five levels to a depth of 400 feet (125 meters). The average grades of gold production were between 0.25 - 0.5 oz. per ton. 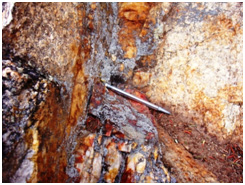 Previous work on the properties included property wide reconnaissance surveys, soil sampling programs, geophysical surveys, preliminary trenching, and old mine workings rehabilitation. During the 1995 and 1996 exploration seasons 23 reverse circulation drill holes were completed on Morning Glory. A soil survey conducted in 1992 suggests the Queen vein may be auriferous over at least 2,400 ft (750 meters).

The Company also has a 100% lease option on certain additional mineral claims located in the same area. A total of US$45,900 has been paid to date to the optionor. To exercise the option, the Company must pay a total purchase price of US$1,000,000 including the advance annual minimum royalty payments.

The Morning Glory and Queen of the hills claims remain in good standing.

Virgin River & Centennial Zone, Athabasca Basin, Northern Saskatchewan, Canada
Uranium
During the year ended February 28, 1999, the Company’s wholly owned subisidiary, Coronation Mines entered into a joint exploration agreement with UEM Inc. whereby Coronation aquired 2% of the Virgin River project with the first right of offer to acquire up to 10% and a carry through to $10 million worth of exploration and development. UEM Inc. was a corporation owned 50% by Cameco Corporation ("Cameco") and 50% by AREVA. Subsequently, UEM was dissolved and both Cameco and AREVA became equal partners (49% each) in the joint exploration agreement. Cameco is the operator of the project. As of February 28, 2016 over $33.9 million has been spent on the project exploring a large unconformity-type deposit that has resulted in the discovery of the Centennial Deposit.

The Centennial Deposit has been traced over 650 meters of strike length and has a minimum across strike width ranging from 10.0 meters to 52.5 meters. Approximately $11.9 million was reported by Cameco as having been spent on the 2009 - 2011 drill programs that were designed to follow up on the 2004 - 2008 drill results from the Centennial Zone.

High grade U3O8 intersections of up to 298 GT have been intersected within the Centennial Deposit (33.9 meters grading 8.78% U3O8 -- see Company News release dated May 30, 2011). GT is defined as % grade U3O8 multiplied by thickness in meters. Assay results returned from diamond drill programs from 2004 to 2011 on the Centennial deposit have resulted in 39 significant primary uranium intersections returning results greater than 10.0 GT.

All drill holes completed on or immediately surrounding the Centennial Deposit in 2011 displayed uranium enrichment throughout the basal sandstone in contact with the basement unconformity with elevated pathfinder elements such as lead, vanadium and nickel. Significant high grade uranium intercepts were intersected in 7 of the drill holes with GT's over 10.

The table below shows the significant diamond drill results greater than 10.0 GT from the Centennial Deposit From 2004 -2011. Please note: True widths of the intersections have not been provided to the Company. All uranium assays were carried out by the Saskatchewan Research Council of Saskatoon, Saskatchewan. Delayed neutron counting and / or X-ray fluorescence spectroscopy U3O8 check assays were completed on all split assay samples returning greater than 1.0% U3O8. The average of the check assays and the Inductively Coupled Plasma - Optical Emission Spectroscopy results were used in the calculations of grade thicknesses. A Geochemical Compilation Report was sent out to joint venture partners and filed for assessment credit. Approval of the assessment filing will keep the project land in good standing until 2017. There was no proposed budget for field work for the current period.

The El Milagro Project is located in the central plain of Tamaulipas State in Mexico. It lays along the furthest southern extensions of the Chihuahua trough, 60 kilometers northwest of the city of Tampico on the coast of the Gulf of Mexico. Alkaline dikes and sills along the caldera ring fracture carry semi-massive sulphide stockwork zones in altered intrusive rocks. eCobalt entered into a purchase option agreement in 1998 that was completed at year end February 28, 2003. The Company now has a 100% interest in the property. The primary target defined within the Milagro Concessions is the Santa Maria Vein, a 1-4 meter wide tabular subvertical NNE trending breccias vein that has been mapped over a strike length of 450 meters, with a lead-rich polymetallic assemblage and bonanza silver grades. This vein, localized along the footwall contact of a sericite altered dike, is cemented by a fine grained intergrowth of galena, sphalerite, pyrite, barite and manganese oxides.

Silver values across the dike in the Santa Maria workings vary from 0.8 to 3.8 kilograms/tonne over 4 metres. Accompanying base metal values include lead assays ranging from 10.3% to 12.3% and zinc assays from 2.8% to 6.8%. Anomalous copper values are also associated with the mineralization. Mineralization is very low in arsenic, mercury and cadmium and only slightly elevated in antimony.

The Milagro Mine was a fortuitous and relatively recent discovery and as such it is probable that other silver-rich vein and replacement zones exist within the area covered by the Milagro and Santa Maria Properties that have not been exploited by artisanal miners. During fiscal 2009, management was informed that the Mexican Government had intentions to establish a Protected Area (PNA) with the rank of Biosphere Reserve "Sierra de Tamaulipas" by the SEMARNAT -- National Commission of Protected National Areas (CONANP) located in the municipalities of Aldama, Casas, Gonzalez, Liera and Soto La Marina in the State of Tamaulipas. The El Milagro project lies within the PNA, and as such is subject to more stringent environmental impact studies in the event the project moves toward feasibility and production phases. The permitting of the project is not expected to be any more onerous than what the Company's internal environmental standards and guidelines require and what it has already experienced and is familiar with during the exploration and development of its other mineral projects.

As the new PNA does not preclude Minera Terranova from developing and mining the project, in April of 2011, the Company announced it has expanded its core land position and continues to evaluate the project mineral occurrences on the property and define targets for further development.